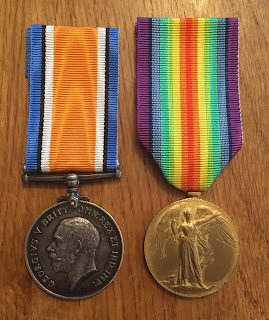 One way or the other, there's quite a lot of information that survives for Apsley Stevenson whose medals I bought last week. He was born in Kingston, Surrey in 1893 and baptised at St John's Church, Kingston on the 16th July that year. The son of Benden Apsley Stevenson and Sarah Ann Stevenson, Apsley appears on the 1901 and 1911 census returns living with his family at Portland Road, Kingston. By 1911 his widowed mother was the head of the household, earning a living as a dressmaker, whilst Apsley - recorded as Arthur Apsley - was working as a grocer's assistant.

Surviving papers in WO 363 reveal that Apsley enlisted on the 29th January 1916 and that he was mobilised on the 2nd March 1916 and posted to the 3rd Battalion, Queen's. Three months later on the 9th June he was sent overseas, joining the regular 1st Battalion in the line, and less than a month later, on the 3rd July 1916, he was killed in action, almost certainly blown to smithereens in a front line trench.

The battalion was in trenches at Cuinchy and the war diary entry for the 3rd July reads:

"A quiet morning. 'Minnie' very active in left and right company frontages in afternoon and evening. Casualties: 4 killed and 2 wounded. At 10.30pm were relieved by 1st Middlesex and proceeded to billets in Le Quesnoy."

The Commonwealth War Graves Commission records that four men from the 1st Battalion, Queen's died that day. Private Frederick Killick, Lance-Corporal Mitchell and Apsley Stevenson were all killed in action. Frederick Stevens, a career soldier with the battalion, died of wounds and would be buried in Bethune Town Cemetery. Lance Corporal Mitchell would also be buried in nearby Cambrin Military Cemetery but both Apsley and Frederick Killick are commemorated by name on the Loos Memorial. Apsley was originally reported missing and Frederick Killick's death was officially accepted on the 15th July 1916.

Apsley Stevenson is also commemorated on the Kingston-on-Thames war memorial.