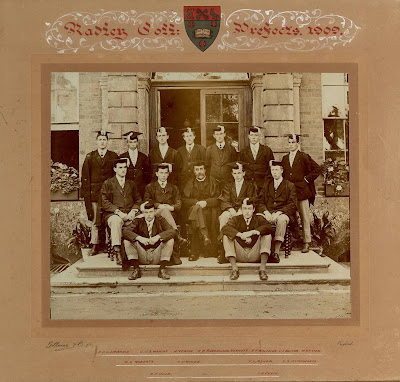 When researching a man for my British Army Ancestors Facebook page I stumbled across the Radley College archive which is a collection of digitised photographs and books relating to Radley College in Oxfordshire. There are specific collections of portraits of former students in army uniform but there are also many servicemen to be found in photos like this one, in this case prefects photographed in 1907.

The majority of these men would have gone on to serve as officers in one or more of the British military arms and, blessed with uncommon and therefore easily searchable names for the most part, it doesn't take too much detective work to quickly uncover further detail.

In the image that I have posted above, a quick search on my British Army Ancestors website shows, for instance, that M A (Maurice Astley) Knatchbull-Hugesson served as a second lieutenant with the Grenadier Guards and was KiA in 1916, whilst C W (Cyril Walter) Holcroft served as a captain with the Worcestershire Regiment and was later awarded the Distinguished Service Order (DSO). The archive has been indexed and OCRd as appropriate and will be an invaluable resource, and a free one at that. Well done to Radley College for taking the decision to digitise its archive.