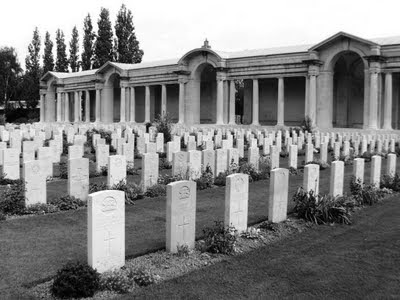 A flood of enquiries this week, but first an appeal to DAVE BIRD, enquiring about your relative killed in action at Ypres. Dave, please re-submit your enquiry as your e-mail address was incomplete.

Queries into the Army Ancestry mailbox this week have mostly been WW1 related, although we have some potentially interesting Boer war era work and we are also checking the availability of surviving (and publicly accessible) documents relating to a WW2 Lt Colonel killed in action with an Indian regiment in 1941.

Enquiries this week have come from Australia, Canada, Britain and the Republic of Ireland.

The image on this post appears on the Hampstead Pals website and shows the Arras Memorial to the Missing. One of our projects this week was for a man whose name appears on the Arras War Memorial.