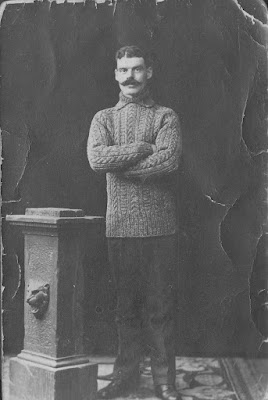 I am always delighted to hear from descendants of the men I commemorate or refer to on my military blogs and the man above is a new face to me, thanks to an email from his granddaughter yesterday. L/8485 Private Ernest Locke appears on my Royal Fusiliers PoW list on the Army Service Numbers blog, and Maureen Locke has sent me this undated photograph of him as a prisoner. 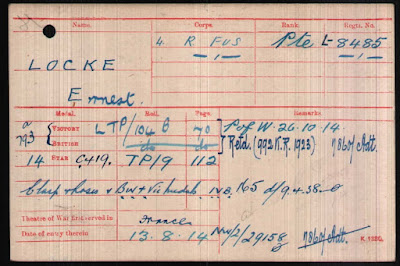 Ernest Locke arrived overseas with the 4th Royal Fusiliers on the 13th August 1914, an original member of the BEF and an early arrival in France. No service record appears to survive for him but his regimental number indicates that he must have joined the regiment around December 1900. His terms of enlistment would have almost certainly been seven years with the colours and five on the reserve which suggests that he probably chose to extend his period of reserve service as a Section D Reservist. This would have given him a further four years' reserve service tacked onto his 12 years (effective from December 1912) and whilst on the reserve he would have been paid 4d a day. 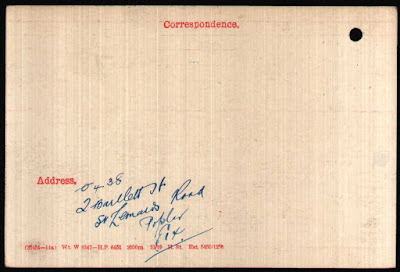 Ernest's medal index card is above, the reverse showing an address in Poplar, East London. On my PoW database I have an address for 179 Maypole Road, Battersea.
Ernest Locke was captured on the 26th October 1914 at Thulin, Belgium, this information appearing on a single page in the ICRC collection online. The prison camp is noted as Altdamm and his sojourn there quite possibly saved his life. I do not know when he was repatriated to the UK, but presumably in late 198 or early 1919.

My thanks to Maureen Locke for this great photo of her grandfather.
I offer a fast, efficient and cost-effective military research service. Have a look at my military research page and drop me a line if you think I might be able to help.
﻿
﻿